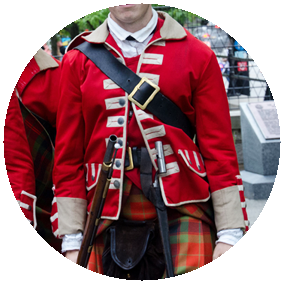 The jacket is a similar style to that worn by civilians.  It aided movement and wearing of other components of the uniform. The dominant colour for infantry regiments is red.  The low cost of red dyes explains its use by the army; madder red for soldiers and scarlet red for officers.  The predominance of red in the British Army gave rise to the expression “red coats”, a term commonly used in referring to British units.  Regiments can be identified by the distinctive colours found on the facings and sleeve cuffs.  The colour of the 78th Fraser Highlanders is buff.  The soldiers’ trimming is a white braid, while NCO’s sport a silver braid and officers a gold one.  Lashes worn on the right shoulder is a mark of distinction that is added to the different ranks. 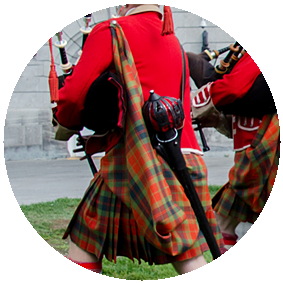 The kilt is characteristic of traditional Scottish dress.  It is a wraparound skirt made of pleated wool and features colour “tartan” motifs that ends at the knee.  The different tartans allow clans to distinguish one from another.  The 78th Fraser Highlander soldiers wear the tartan of Clan Fraser.  In addition to the kilt, soldiers also wear plaid around their waist.  Plaid is a large piece of wool cloth that can be fold and tied behind the left shoulder.  Plaid serves as cover during bivouacs and offers protection against the rain. 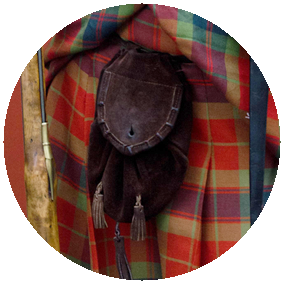 The wool hose stops below the knee and is usually decorated with a red and white checkered pattern. 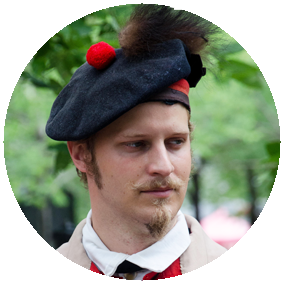 The balmoral is the headgear for Scottish troops.  The felt bonnet is decorated with a red and white checkered circle, and adorned with a pompom and a strip of bear fur.  The regimental grenadiers wear a miter of bear fur symbolizing their elite status. 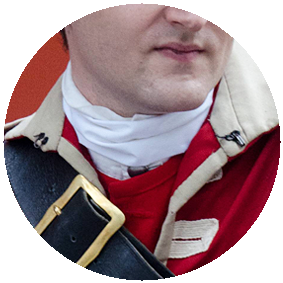 Every soldier wore a shirt similar to what everyone wore during that period.  The collar is closed by a tie, a long piece of the same fabric wrapped and tied once at the neck.  Officers’ shirts and ties were more elegant and refined, and decorated with lace on the sleeves. 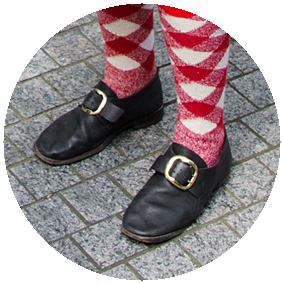 Soldier’s shoes were all similar. Made of black leather, they were closed by a brass. There was no differentiating between the left and right foot as there existed only two sizes: small and large. 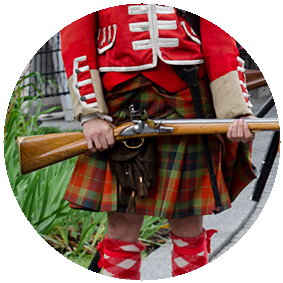 The musket was the regulation weapon for French soldiers since the late 17th century. Equipped with a flint plate, the musket permitted a more secure fire at all times.  In New France, les Compagnies franches de la Marine principally used models from 1728 and 1745, fabricated by manufacturers at Tulle and Saint-Étienne.  Our soldiers used reproductions of the 1763 model fabricated at Charleville.  The military calibre is .69, a calibre superior to that of trade guns. 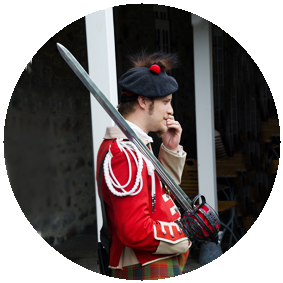 The swords of 18th-century soldiers were used more for pageantry than for combat.  They served as a last resort.  In New France, when soldiers wore their swords to town they left them at the royal magazine and replaced them with a hatchet, a far more useful tool especially for campaigns to the western posts.

The first bayonets were, in short, knives stuck in the barrel of a firearm.  Thus, the firearm transforms into a spear.  In order to accommodate the firing of the weapon, the socket bayonet appeared by the middle of the 17th century. 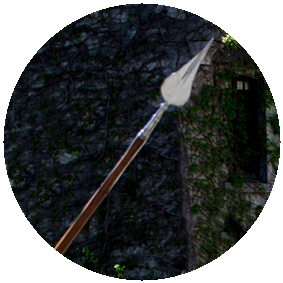 The armies of Europe abandoned the pike as an infantryman weapon during the 17th century.  However, sergeants and officers kept their pikes, spontoons, halberds and other partisans as status symbols.  Sergeants, among others, used their halberds to align troops and to force a forward march on the battlefield.  Officers usually sported a pike.  In New France, sergeants and officers gradually replaced their halberds and pikes for firearms whilst they were on campaign. 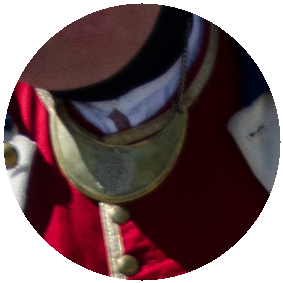 The gorget is a vestige of a knight’s armour.  It became a mark of distinction for officers throughout Europe, all of whom were descendents of noble families.  Taking the form of a gilded brass crescent, the gorget usually carries the royal seal and sometimes the number of the regiment.

The cartridge pouch carries a soldier’s reserve cartridges.  Attached to the belt prior to 1750, it was then worn as a shoulder strap.  Made of leather, it is equipped with a block of wood pierced with a dozen holes or compartments used for holding the paper cartridges that contain black powder and a bullet of lead. 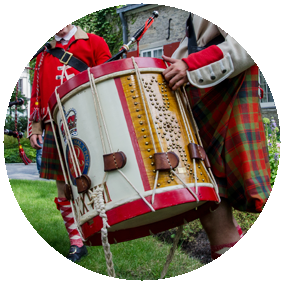 The drum is more than a military musical instrument; it marks the troops’pace, accompanies battlefield manoeuvres and transmits officers’orders.  Its rhythm marks the soldiers’day from morning till night.  Soldiers drum the “Diane” at wake-up, “Assembly” for gatherings, commotion for combat, etc.  They were grouped together on the battlefield for maximum effect. 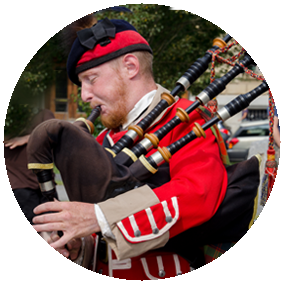 Bagpipes are a traditional Scottish instrument.  A pastoral instrument played outdoors, it can be heard from long distances.  Banned by the English following the Conquest of Scotland in 1745, bagpipes were reintroduced in Scottish regiments in service to the crown.  Since then, they have remained a fixture of Scottish units and have since been present on all battlefields up to the 20th century.  While a variety of bagpipes exist, it’s the “Great Highland Bagpipe” that quickly became the instrument favoured by the military. 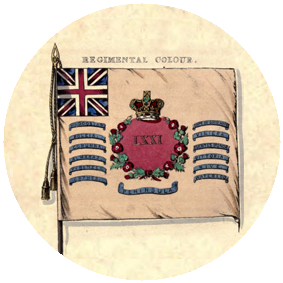 Each regiment is represented by a distinctive flag called the “colours”.  It represents the rallying point on the battlefield and must always be carried high.  If captured, it is considered a trophy by enemy troops.  Each regiment is represented by an orders flag that corresponds to its royal affiliation (always white) and a colonel flag that sports the colours and symbols distinct to that regiment.  The Troupes de Marine, organized in companies, did not possess “colours” prior to 1737 when the king accorded a flag to the Brest companies.  The flag is Quartered into squares of red and blue and bearing a white cross with the motto “Per mare per terras” struck by lightning in its centre. 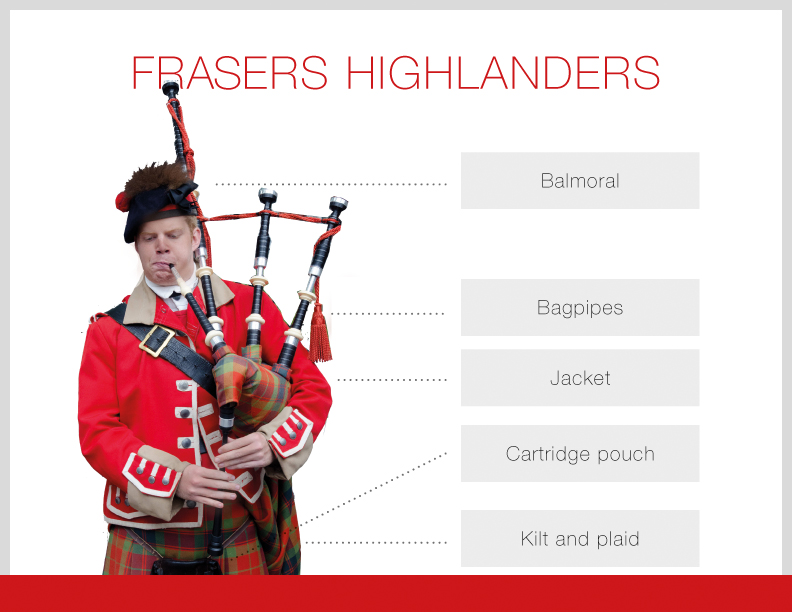 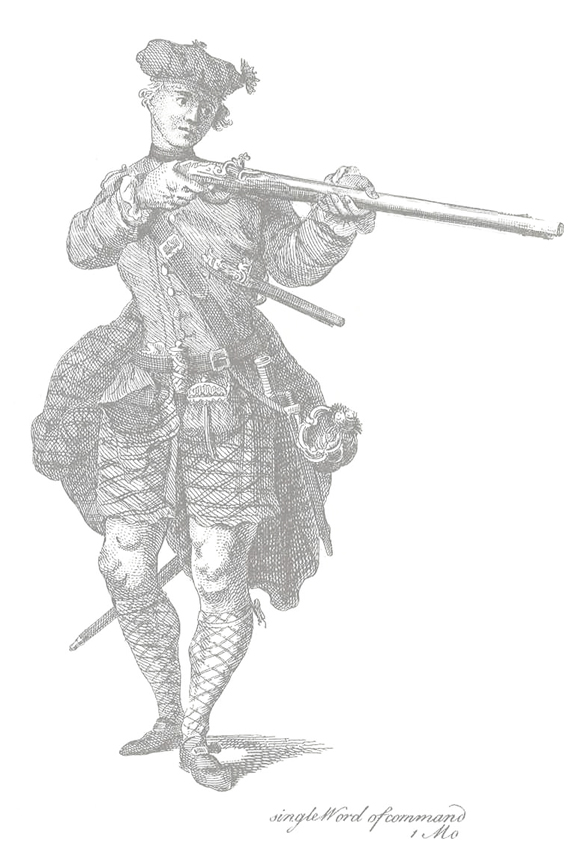 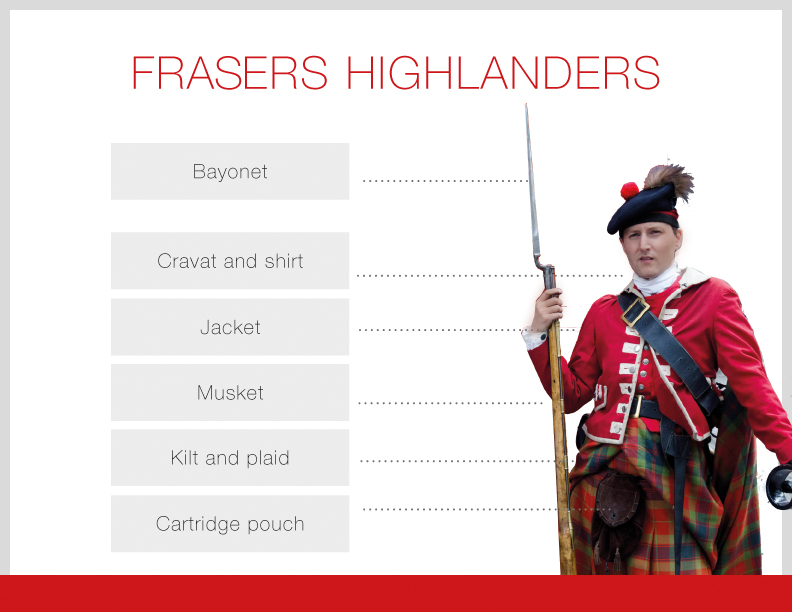 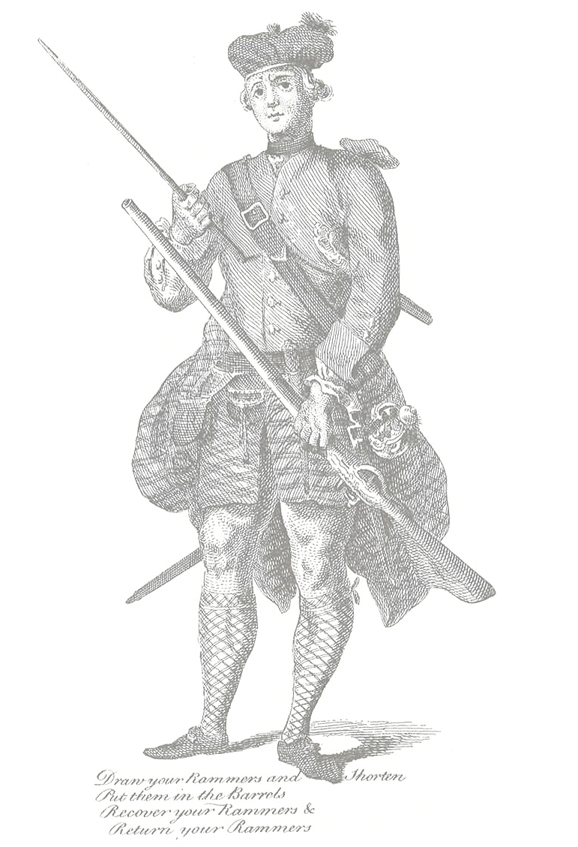 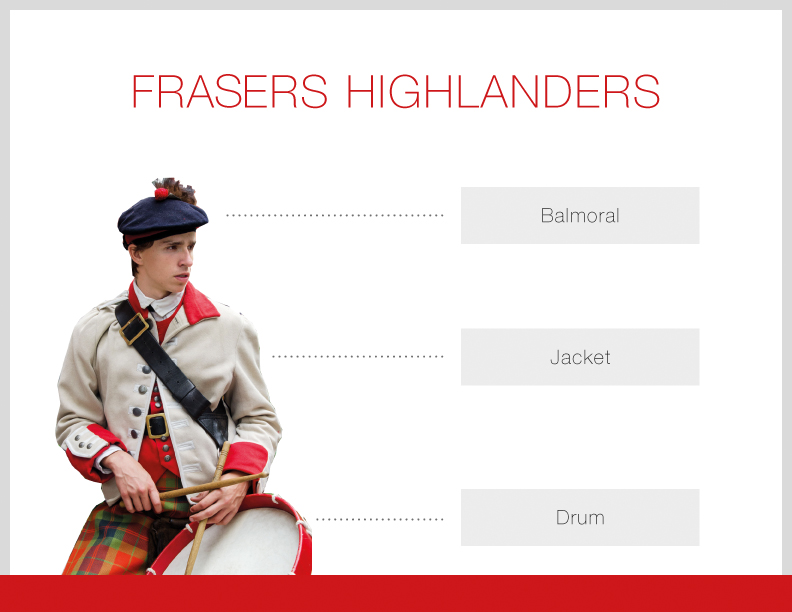 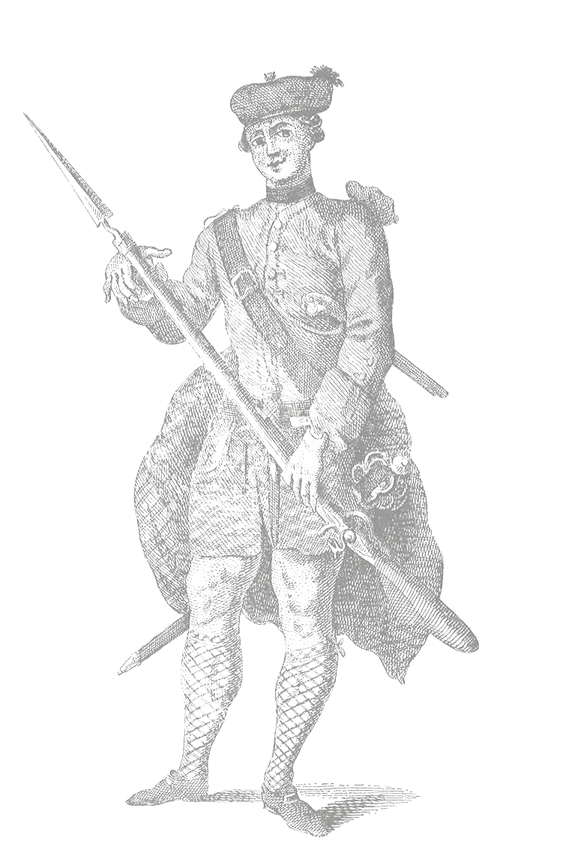