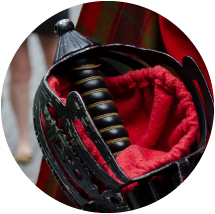 The « Anciennes troupes militaires de Montréal » (ATMM) is a non-profit organization
whose mission is to develop, promote and spread knowledge related to the heritage of military
troops who participated in the development of Canada’s and Quebec’s society and culture.

The objectives of the Anciennes troupes militaires de Montréal

Promote, organize and supervise the broadcast of knowledge and activities on military heritage as well as the legacy of military personnel from previous eras on Canadian and Quebec society and culture.

Bring together all people, men or women, of all origins, interested in military heritage and the tangible traces left by it on Canadian and Quebec society and culture.

Maintain a program of historical interpretation and educational activities on the military heritage and its impact in order to tell the rich, plural and mixed cultural history of Canadian and Quebec society and culture.

Promote and support the advancement of knowledge on military cultural heritage and enable students to have a unique work experience related to history and heritage, in order to acquire useful professional skills and to encourage scholarly perseverance.

Offer and provide services of any kind related to the mission of the corporation.

A story that connects us. 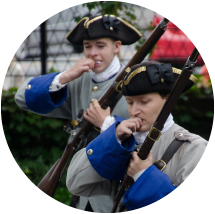 The Compagnies franches de la Marine were the French royal troops which ensure the defense of ports, ships and colonial territories between 1690 and 1762. Having arrived in 1683 in Canada, organized in independent companies reporting to the Ministry of the Navy and the Colonies, they ensure, with the First Nations, the defense of all of New France and the largest contingent served under the Government of Montreal.

From their arrival, they were involved in all fights, battles and skirmishes until the end of the French presence in America. From the beginning of the 18th century, the majority of the officers of the Compagnies franches were made up of &quot;Canadians&quot;, born in America, often speaking several native languages. There are among others, the Le Moyne, the Marins, the Lacorne, de la Chenaye, de Repentigny, de la Vérendrye, etc. The officer corps also included Métis, notably Charles Michel de Langlade.

Soldiers were recruited from Europe and encouraged to settle in the colony upon completion of their service. Their stay with the locals contributed to the settlement and the economy of Canada. They carried out major works in peacetime, such as the construction of the fortified walls of Montreal and the Chemin du Roy.

Their impact on demographics is more than 30% on the 10,000 french immigrants who settled between 1608 and 1750. They are found by the hundred in marriage certificates of parishes within the island of Montreal, proof of their integration into colonial life. The impact of their social and cultural contribution to what will become the Quebec and Canada of today is unsuspected, but too little known. 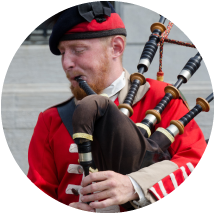 The 78th Regiment of Foot, Fraser Highlanders, was raised in Scotland during the Seven Years’ War (1756-1763) to serve in North America. Two battalions were raised, the 77th Montgomerie’s Highlanders and the 78th, which was commanded by Simon Fraser, Master of Lovat. His father was executed for his participation in the Jacobite rebellion of 1745-1746. In 1758, the regiment was made up of 1,542 soldiers. Arriving in Halifax at the beginning of the same year, it was present at the capture of Louisbourg. It was the most numerous and most affected regiment during the Battle of the Plains of Abraham, took part in the Battle of Sainte-Foy and was the first to enter Montreal through the Porte des Récollets during its Capitulation in 1760.

The Regiment was dissolved in Quebec in 1763 and like several French soldiers, around 170 men (officers and soldiers) chose to settle in what became the province of Quebec, particularly in the regions of Charlevoix and Bas-du-Fleuve. The officers were granted lordships and established their demobilized soldiers there.

These men united in large numbers with the daughters of the French settlers, as many of them spoke French and were Catholics. They are at the origin of the presence and influence of the Scots in Quebec and Montreal society. For example, an officer’s son, Simon McTavish, founded the North West Company, a rival to the Hudson’s Bay Company. Their culture, through the kilt, bagpipe and Scottish dance, offers traditions that are still very much alive today, as evidenced by the annual Highland Games in Montreal.

History of the historical interpretation of these units
&
the innovative project of David M. Stewart

In 1962, as part of Canada’s participation in the Seattle World’s Fair, the Canadian Army was to present a show recalling the country’s military past.

While organizing his history museum, David M. Stewart had already conducted some research on Canadian military history with Marcel Baldet, secretary-general of La Sabretache, a French organization with specialists in French military history and uniforms of all ages. Mr. Baldet convinced his Canadian friend that one should focus on the Compagnies franches de la Marine, present everywhere in New France from 1683 to 1760, rather than on the Carignan Salières Regiment, who remained in the colony for only four years (1665-1668).

Working in concert with experts from the Canadian National Parks Service, Mr. Stewart suggested that the Canadian army reconstitute a Compagnie franche de la Marine to illustrate the French military presence in Canada. This is how a company of the Royal 22e Régiment was dressed, equipped, armed and trained for the needs of the show in Seattle. The following year, David M. Stewart decided to “recreate a garrison and an atmosphere of ancient times …” for his museum on St. Helena Island. By repatriating all the equipment that had served with the Royal 22e Régiment in Seattle, he inaugurated the first historic animation program in Quebec.

As early as 1963, students from the Montreal region were then hired to maneuver in the museum’s courtyard. The transmission of knowledge and skills by students has continued year after year since that time. More than 1,200 students have been promoting this cultural heritage.

With Expo’67 fast approaching, David M. Stewart added to his military heritage animation project in 1965 by organizing a squad of pipes and drums. The squad was outfitted with the uniforms of the 78th Fraser Highlanders.

Throughout the duration of Expo’67, the two reconstituted units were present daily at the fair site and operated continuously thereafter on Île Sainte-Hélène until 2013. Having been taken over by the Société Historique du Lac Saint-Louis, and today by the Anciennes troupes militaires de Montréal, the Compagnie franche de la Marine and the 78th Fraser Highlanders have been a tourist entertainment at the Château Ramezay Museum and Old Montreal since 2014.

Since 1963, more than 1,200 students have
been promoting this cultural heritage.